Facts and figures behind the opioid epidemic: three clinical methods to alleviate pain 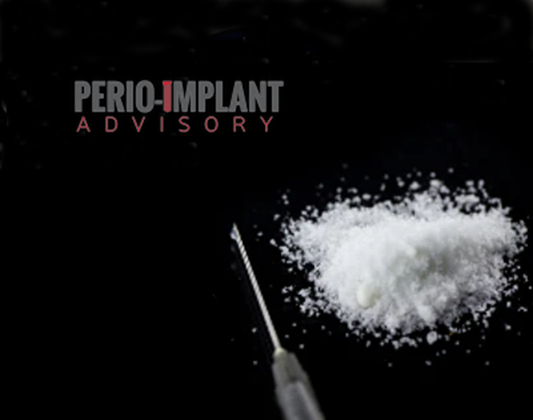 Scott Froum, DDS, editorial director of Perio-Implant Advisory, discusses the CCDAOC white paper recently sent to the president outlining propositions to combat the opioid epidemic and the direct effects they will have on dental providers. He also shares three clinical techniques to reduce the need for prescription pain medication for postsurgical procedures

Recently, the president of the United States and his cabinet staff declared a national public health emergency and dedicated federal funds to combat “the worst opioid crisis in the history of the United States.” In addition, the Commission on Combating Drug Addiction and the Opioid Crisis (CCDAOC) was established with the goals of regulating and monitoring the dispense of opioids among health-care providers. THESE ACTIONS ARE THE RESULT OF AN EPIDEMIC OF OPIOID ADDICTION THAT HAS INCREASED EXPONENTIALLY IN THE PAST FEW YEARS.

During 2015, more than 33,000 overdose deaths occurred in the United States attributed to opioids (91 people per day). In 2017, that number jumped to more than 53,000 deaths due to opioids (142 people per day). To give a comparison, the White House task force gave the analogy of a mass-casualty event—the September 11 attacks—loss-of-life occurrence every three weeks due to the opioid crisis. (1)

The staggering number of people addicted to opioid medication is due in large part to the overprescribing of pain medication by medical and dental health-care providers throughout the last decade. The amount of opioid prescriptions given by medical and dental providers jumped from 112 million in 1992 to 282 million in 2012. By 2014, 7.8 billion hydrocodone (Vicodin) pills and 4.9 billion oxycodone (Percocet) pills were being distributed annually in the United States, accounting for 99.7% of the entire world’s consumption.

Briefly, the mechanism behind the class of opioid pain medications is blockage of the µ-receptors in the brain and spinal cord, preventing transmission of pain signals. Dopamine is also released, which produces the euphoric “high” feeling. Morphine and codeine are examples of these drugs that are naturally derived (legally) from the poppy plant, while heroin is illegally synthesized from morphine. Hydrocodone and oxycodone are semisynthetic opioids manufactured in pharmaceutical labs with natural and synthetic material. Fentanyl is a fully synthetic drug in this class with 100 times the potency of morphine.

The etiology of the opioid crisis found its roots in the overprescription of these legal pain medications. Patients, and people associated with these patients, who had access to the pills would become addicted to the “high” they received. Once the prescription ran out, they would find alternative means of obtaining this medication. Because of the expense of these “legal pain medications,” addicts would substitute cheaper opioid alternatives such as heroin and other mixtures of street drugs to satisfy their opioid addiction. (2) Of particular concern is the recent addition of the dangerous and powerful drug fentanyl to other opioid pain medications as a means of increasing potency. Often found to be impure, unregulated, and imported from other countries, the addition of this substance to common street drugs has accounted for the dramatic rise in opioid drug overdoses.

The CCDAOC recently sent a white paper to the president outlining suggested actionable propositions that could combat the opioid epidemic. The suggestions included: eliminate barriers to addiction treatment, increase the number of facilities dedicated to treatment, increase the availability of medication-assisted treatment (alternative medications to opioids such as Suboxone with less addiction potential), provide funding for facilities to carry and order the opioid reversal agent naloxone, provide funding and manpower to install fentanyl detection systems at our country’s borders, and mandate that health insurance companies include mental health and addiction treatment as part of their coverage. (3)

The report states that too few prescribers know how to deal with drug-seeking behavior or identify addiction. It calls on expanded implementation of the Centers for Disease Control and Prevention’s Guideline for Prescribing Opioids for Chronic Pain. The report admits that many of these guidelines are vague and definite methods of clinical practice that can eliminate or lower the need for opioid prescription must be developed. Considering the background story on opioid addiction and the call for specific clinical practice that can lower the need for opioids, the following three techniques can be implemented by health-care providers to reduce the need for prescription pain medication.

No. 1: By-the-clock combination therapy of ibuprofen and acetaminophen —

The combination of ibuprophen and acetaminophen (I&P) therapy has been shown in the literature to be a better analgesic than most opioid-containing formulations, as well as provides more of an analgesic effect than either ibuprofen or acetaminophen alone. (4) Some studies suggest dosing in the range of 300 mg to 400 mg of ibuprofen combined with 800 mg to 1000 mg of acetaminophen every six hours after an invasive procedure. (5) P.K. Clark, DMD, also suggests that you tell the patient “by the clock” instead of “as needed for pain” (PRN) when using this combination. Most studies suggest that the patient start using a dosing combination of 650 mg to 1000 mg of acetaminophen and 400 mg to 800 mg of ibuprofen the night before and the morning of the procedure, followed by this combination therapy every six hours postoperatively for at least the first three days.

Homeopathy is defined as a system of medical practice that treats a disease especially by the administration of minute doses of a remedy that would in larger amounts produce in healthy person’s symptoms similar to those of the disease. (6) Examples of homeopathic medications that are used for pain include Arnica montana, chamomile, Aconitum, essential oils, and other extracts. According to the literature, arnica contains phenolic and flavonoid compounds that lower expression levels of nitric oxide, TNF alpha, interleukins (IL-1 beta, IL-6, and IL-12) that are associated with inflammation and pain. (7) Chamomile was found to exhibit selective COX-2 inhibitor function and block transmission of pain stimuli, which is similar to the mechanisms used by many drugs on the market today designed for pain. (8)

One line of dental products that comes packaged together and is particularly effective is the VEGA Oral Care Recovery Kit by StellaLife.This kit has 16 active homeopathic ingredients designed to accelerate healing; reduce pain, swelling, and bruising; and provide antimicrobial properties to reduce anxiety. It contains arnica, calendula, and chamomile among other active ingredients. All 16 ingredients work synergistically and give the product its unique pain-relieving properties. The kit comes with a mouth spray, gel, and rinse that is designed to be used one to three days prior to the procedure and seven to 10 days postprocedure, depending upon the expected trauma of the surgery. The VEGA Oral Care Recovery kit is a natural answer that can reduce postoperative pain for patients who are recovering from various dental procedures.

A technique common among oral and orthopedic surgeons is postprocedure administration of the long-lasting anesthetic, bupivacaine. This rationale not only allows time for nonopioid pain management to begin, but it keeps the patient anesthetized past the worst part of pain onset—usually one to three days postsurgery. A new single-dose drug injection, Exparel—bupivacaine liposome injectable suspension—has been designed to offer this anesthetic relief for 96 hours postprocedure. Its manufacturer (Pacira Pharmaceuticals) claims that use of this medication reduces the need for opioid pain prescription by 78%. (9) Questions have been raised, however, as to the cost-effectiveness of using this product versus a less expensive, generic form of the drug. (10)

For more information or to view the entire article,, visit: https://www.perioimplantadvisory.com/resources/contact/16412275/scott-froum-dds